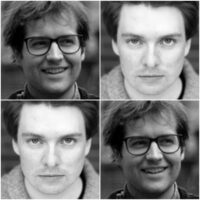 Currently Adam and Ben are co-writing THE HARBOURMASTER, in commissioned development with Adorable Media/C4.

Adam has been writing and performing comedy since 2009 and has created numerous solo shows which have been performed at the Edinburgh Fringe and beyond, including BOOGIE KNIGHTS (2018) – directed by Olivier Award winner Jon Brittain. He is most well known for founding, writing for and directing the Weirdos Collective, an award-winning, critically acclaimed group of comedians. Productions include their well-known pantomimes (which have raised around £30,000 for Great Ormond Street), their spoof Harry Potter performances and in 2017 the award-winning TONY LAW & FRIENDS IN THE BATTLE FOR ICETOPIA: A comedy Play on Ice (at Alexandra Palace Ice Rink).  Adam also runs an advertising themed comedy night “Tone of Voice” based on his career in advertising.

Benjamin is a writer, performer and theatre producer with a specific interest in musical comedies.  Since 2017 he has been touring his 4-hander farce CREAM TEA AND INCEST nationally and internationally, including to the Gilded Balloon, Edinburgh and Kino Elektronik, Warsaw. This was followed in 2019 by the original Scooby Doo parody RICKY RIDDLEGANG AND THE RIDDLE GANG, which toured the UK starting at the New Wimbledon Theatre.  Ben is currently developing a site specific piece of musical theatre in conjunction with Bodiam Castle; he is also a comedian and member of the alternative comedy collective Weirdos and a regular contributor to Succubus magazine.