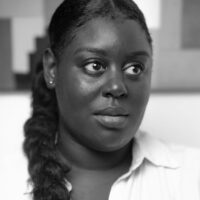 Jessica’s debut play QUEENS OF SHEBA, co-written with Ryan Calais Cameron, won the Untapped Award 2018. The play went to Edinburgh Fringe Festival in August 2018 and had a successful sold-out 4 week run with 4 and 5 star reviews across the board and won The Stage Award 2018. It later transferred to New Diorama Theatre for a 3-week sold out run. In 2019, Queens of Sheba went on a 10-city National Tour and won an OFFIE in 2020 for Best Performance Piece for its run at Battersea Arts Centre. The screen rights have been optioned by Tiger Aspect for a six episode 30-minute comedy drama adaptation to be written by Ryan and Jessica. Jessica is also a spoken word artist and spends her time in both London and Ghana. In Ghana, she works with emerging playwrights through workshopping and is a grantmaker for creative organisations across the continent.