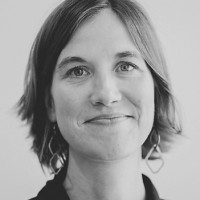 Screenwriter Line Langebek was born in Denmark and has been living in the UK since the late 90s. She is currently lead-writing on Finnish Childrens’ series THE ROYALS NEXT DOOR (Pikkukala Productions) and developing a feature film with (Lone Scherfig’s company) Creative Alliance, Denmark, funded by DFI.  Other recent commissions include co-creating and writing on 24 part crime series DE UNDERJORDISJKE (trans. The Underworld People) for the Danish Broadcasting Corporation (developed but not produced).

Line has worked as a commissioned writer on shorts and features in the UK, US, France, Denmark and Norway. Her first produced feature film I’LL COME RUNNING, written with director Spencer Parsons, was released through IFC Films in the US, while her short film writing credits include FIELD STUDY, an adaption of a Rachel Seifert short story, which was produced summer 2013 through Rooks’ Nest, directed by Eva Weber under the BFI Shorts Scheme; ECHOES (starring Joanne Froggatt); the Reel Talent Award scheme film HE SAID (starring Kerry Fox); CHEER UP; ANONYMOUS (starring Amanda Drew), and the Albanian-set documentary DUAM DRITË: WE WANT LIGHT. Line has been picked as one of only 4 writers on the 2015 ‘Guiding Lights’ mentoring scheme run by The Lighthouse, mentor Frank Cottrell-Boyce and was part of the EIFF Network Scheme 2015. Line has attended The European Film College, studied scriptwriting at Bournemouth University and been selected for the Berlinale Talent Campus 2007 and the BFI/Think Shoot Distribute 2010 scheme for emerging UK filmmakers. She also studied literary translation at Middlesex University and has in the past subtitled programmes such as LITTLE BRITAIN for Danish TV, contributed to magazines such as Broadcast, Scriptwriter UK, written short stories for Norwegian radio, NRK and more recently, has been working with Buccaneer Media on an original series written by Torleif Hoppe (‘The Killing’) for BBC America called BANUTA.