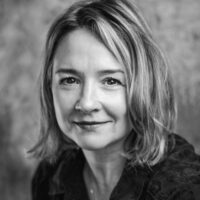 Rebecca’s first play A BIT OF LIGHT won a commendation award for The Bruntwood Prize 2017 and the film rights are under option.  She has original projects in development with Witchery Pictures and Avalon.  She wrote two episodes in S2 of BREEDERS, for Avalon/Sky and is now writing on series 3.

As an actor in theatre, television, film and radio her credits include Toni in DETECTORISTS, FEARLESS, ORDINARY LIES, TO WALK INVISIBLE, THE BORROWERS and the film ORTHODOX. Theatre includes WINTERLONG, BLINDSIDED, AS YOU LIKE IT, MACBETH, ROMEO AND JULIET and A MIDSUMMER NIGHT’S DREAM.