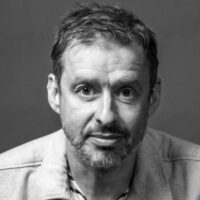 David is currently developing psychological drama THE COUPLE NEXT DOOR for Eagle Eye Drama/Britbox International, international thriller PLAYING DEAD for Red Planet Pictures, and YÉ-YÉ, a series about the French pop scene of the 60s, co-written with Axelle Ropert for Studiocanal Original in Paris.

He recently wrote 2 episodes for Season 3 of MARCELLA for ITV/Netflix, including the series finale.

David’s 4 part serial BOY MEETS GIRL, a comedy drama starring Martin Freeman and Rachael Stirling, was transmitted on ITV1 in 2009. In 2010, he co-created and wrote BEDLAM, a supernatural series for Sky Living, the channel’s first ever foray into original drama. The 6 part series aired in the UK and on BBC America in 2011. Recommissioned by Sky Living, Bedlam Series 2 aired 2012. His original 5 part legal thriller THE CASE tx’d on BBC1 Daytime stripped across a week in 2011.

David lives in Leeds with his wife, who also works in the industry, and their 2 children. A music fan and DJ, he hosts a monthly foreign language music show, Mondo Pop, for Alto Radio, and co-hosts an album of the month podcast, This Is Not Happening.