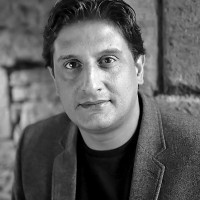 TV and Film:  Ishy is writing for PHOENIX PARK (CBBC) and HOLLYOAKS (Lime/C4); he is on the writing team for ATOMIC BAZAAR (Netflix/Pulse Films).  Other credits include: SHAKESPEARE & HATHAWAY (BBC, 1 ep) and ACKLEY BRIDGE (The Forge/C4, 2 eps).  In 2018 TAXI TALES, produced by Tamasha, was broadcast on BBC2 as part of BBC LIVE, (BAC/ACE/BBC) live theatre broadcast.  Ishy took part in the prestigious Media XChange Advanced Writing For Television Drama Programme (2017) and the BBC TV Drama Writers Programme (2016) and wrote LIFE’S LIKE THAT for the the BBC TV Brief Encounters strand.  He also participated in the Bush/Kudos new writing scheme.  In 2013 half hour standalone comedy-drama DOUGHNUTS was broadcast on C4 as part of the ‘Coming Up’ season and short film OUR LAD was produced, directed by Rachna Suri, which was selected for multiple international festivals. Ishy has two feature films in development, FRAUD with Bend It Networks (Gurinder Chadha) and PAAK UNITED, with producer Paul Kewley, both projects development funded by Creative England.  In 2013, he wrote short film PERFUME for Eclipse Theatre’s ’10 x 10′ online project.

Theatre: Currently Ishy is under commission to both the Royal Shakespeare Company and National Theatre.  APPROACHING EMPTY, a co-production between Tamasha/The Kiln/Live Theatre, Newcastle opened at The Kiln in January 2019 and toured.   In 2016, his play WIPERS, a Leicester Curve/Watford Palace/Belgrade, Coventry co-production toured to those three theatres. In 2014 his monologue for Company TSU played in double bill BEATS NORTH at Edinburgh Fringe Fest and on tour.  His play SNOOKERED was produced by Tamasha/Oldham Coliseum/The Bush and toured in 2012 taking in the Traverse Edinburgh and a 4 week run at the Bush Theatre, London.  Ishy was the 2012 Pearson Writer in Residence at the Manchester Royal Exchange and in 2013 Snookered won ‘Best New Play’ at the Manchester Theatre Awards.

Radio: Ishy Din’s first radio play was JOHN BARNES SAVED MY LIFE for BBC Radio 5 Live.  Other credits include WHOSE BABY for BBC Radio 4 and PARKING AND PAKORAS for local radio.