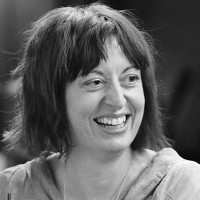 Lucy Catherine is a writer for Film, Television and Radio.

Lucy’s first Feature Film, IN THE DARK HALF, was produced under the BFI ‘ifeatures’ scheme, (Matador/BBC Films) and premiered at Raindance in 2011.  In 2016 Lucy directed her first short film which she also wrote, SOUL SONG, funded by Creative England.  She is slated to direct her full length horror feature FEEL THE LOVE, (Early Day Films).