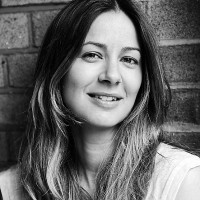 Currently, Tess is on the writing table for US Comedy CASUAL (Lionsgate/Hulu).  Tess has been writing since she could walk (not 100% true) and her first words were ‘Elvis is the King!’ (100% true). Her romantic comedy MAN UP, made the 2011 Brit List, was picked up by Big Talk Pictures, co-produced by Studio Canal and BBC Films and released in 2015 directed by Ben Palmer and starring Simon Pegg and Lake Bell. Since then she has written the original screenplay TEXTBOOK BEHAVIOUR for Big Talk/BBC Films, as well as co-writing comedy drama DEAD TO ME with David Allison, for NBC International/Lucky Giant. Her latest spec script, comedy drama UNCONVENTIONAL, is in development with Borderline Amazing Productions in the US.

In 1997, she won the Lloyds Bank/Channel Four Film Challenge for her short film BEER GOGGLES, and in 2008 she was chosen for the BFI/Skillset Think Shoot Distribute Scheme for emerging talent in the British Film Industry, which further proves the theory that there is no such thing as an overnight success.