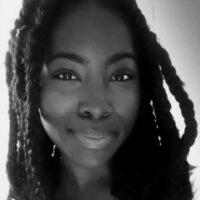 Thara is a comedy and drama writer based in London and Milton Keynes. She started off writing poetry and ventured into playwriting and screenwriting around 2 years ago. Since then, she’s written several short film scripts and has also been involved in theatre scratch night. Her first short play NOT ALL BLACK GIRLS KNOW HOW TO EAT was performed at Spotlight Studios and her most recent short play POEMS FROM MY BROTHER was performed at the Lyric Hammersmith Theatre. Thara’s background is in Law, and she has experience working in both the legal and financial sector.  Her work typically explores topics of mental health, faith, culture and family and she is passionate about telling stories about black people that aren’t just about race.

Thara was a finalist in the 2020 Zeppotron Make a Scene bursary and her comedy script JOBLESS is currently in development with Zeppotron. Thara wrote short film CROWN which was screened at the 2021 London short film festival and has been selected to be included as part of the BBC festival of funny launching in March 2021.  See the film here.

Thara is currently on the 2021 Channel 4, 4Screenwriting scheme.